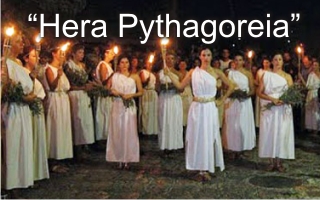 A festival that initiates us to the ancient Greek spirit and culture.

What are we celebrating;

The festival “Hera – Pythagorean” has been celebrated with great success in Samos the last decade, becoming an attraction for both domestic tourists and visitors from all around the world, and is a festival in honor to the ancient goddess Hera.

The worship of the goddess Hera in Samos is testified by the Bronze Age and in particular during the period of the Mycenaean civilization. The most famous sanctuaries dedicated to Hera include Heraion of Samos, an official sanctuary of the island and an Ionic center of worship.

According to the tradition, in the area of ​​Heraion, on the southeastern coast of Samos, Hera was born and raised. She was considered as the patroness of lawful marriage and helper in childbirth pains, also as symbol of humble, pure and devoted wife and spouse.

A hymn to the ancient women’s games

Men’s fights in ancient Greece may be well-known worldwide, however, also women held games at the ceremonies that participated in honor of the deities they worshiped.

In these extraordinary ceremonies that was celebrated the female nature, take as the festival “Hera – Pythagoreia” 2017 of Samos. Night women races with torches, musicians and poetic competitions and a series of other artistic and religious events take place and excite the audience.

The great procession of Heraion on the main streets of Pythagorion and the harbor, the lighting of the flame in the ancient temple of Hera and the women’s street races from the temple to the Pythagorion, as well as the dance-hall with the participation of singers with songs inspired by ancient Greek myths, are supported by the enthusiastic participation of the audience that enjoys every moment.

If you find yourself in Samos after mid-August, attend the festival and live a lifetime experience inspired by the values ​​of the ancient Greeks.

Aramis Rent a Car Samos takes you to the festival safely and keeps you informed of every festival action. Contact us for any information you need so as to rent a vehicle during your stay on the beautiful island of Samos.

You can have totally free as many additional drivers as you wish.

Our prices include all taxes and VAT. No hidden costs.